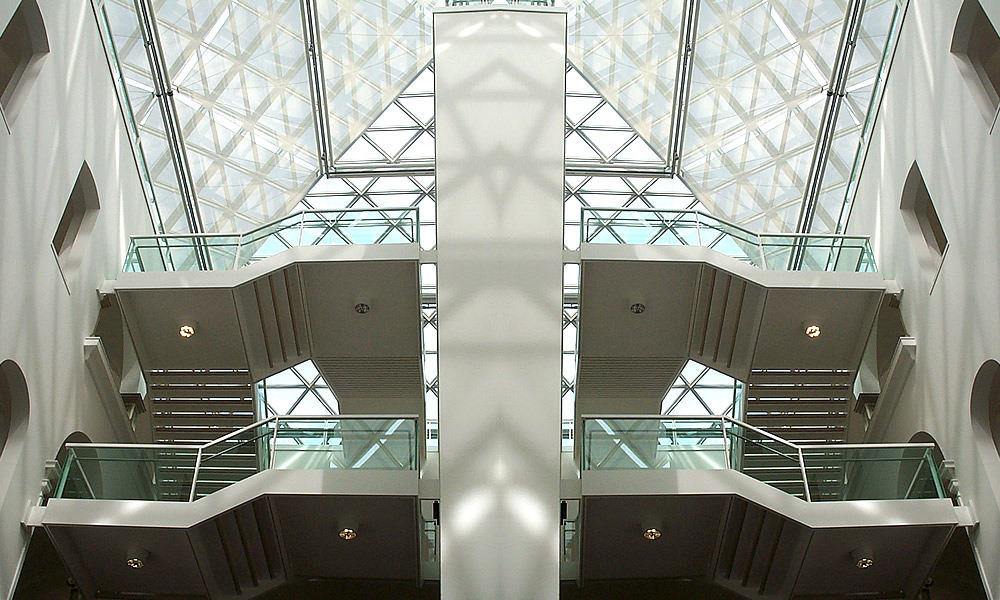 A travel story from Düsseldorf – 2004
originally published in Mississippi Review

It’s only in our minds that things are static. In fact, nothing is. Even signs change their meaning with changing context, in different settings. The museum K20 in Düsseldorf is one of the places that reflects this thesis. I head there as unprepared as possible. A clock strikes quarter past ten as I walk out of the main train station. Which in child’s books always is an old building in the centre of town, next to a café, in front of a huge square, surrounded by trees.

Here, in Düsseldorf, the train station is at the edge of the city centre. Surrounded by sex shops. Squared by four lane streets. Stranded between underground parking lots and run down hotels. A sign points towards the centre of the city, towards more four lane streets. A glass building on the left, apartments block to the right. I follow the other pedestrians like in a metropolis dream. A crossing. A red light. Another street. More glass buildings, higher than the ones before. Then, a street without cars. A stone bridge. A water fountain, framed by statues of long gone persons. And a sign, saying: Art Hall – 0.8 kilometres. Almost there. Still I don’t see it.

At a plaza, a circle of buildings. One is a concrete cube. One is a Gothic church. And one is the K20. A building that doesn’t want to fit, black and monumental it stands there, reflecting the outside in its curved walls. Red letters on the façade announce Donald Judd. Beneath them, a passageway that leads to an atrium, to another wall. The letters there, inversed, in white, above a pool in rectangular shape. On the left side, underneath the huge D, a man. A beggar. Brushing his teeth. Washing his face in this museum pool, in Düsseldorf, in one of the richest cities of Germany. This could be an installation. But it isn’t. It is real life, harder to grasp than conceptual art sometimes.

Inside, it is a different world. Well tempered atmosphere. Soft light. Round lamps. Silent space. A curved ceiling, some floors above. An elevator, for convenience. I take the stairs. On the first floor, it is Pablo Picasso and Salvador Dali. French Fauves and German Expressionists, overwhelming in their vigour, followed by blue horses and coloured cubes. Paul Klee and Piet Mondrian. René Magritte, also. Paintings and paintings, walls contrasting attitudes, colours resembling chores, lines reflecting lives. Some rooms further, a close encounter. A composition in blue, by Wassily Kandinsky. The painting, I saw its reprint once in a shop window, and couldn’t resist. I pass it every day ever since, on the way to the kitchen. And now, here, the real blue. Same size, different touch, telling about the difference between original and copy.

„The sign of the circle, it is the clearest mark of the fourth dimension,“ the audio guide explains in a neutral voice.

What I don’t know yet: the sisters of the circle, they are waiting downstairs, just a stairway away. But first it is cheese cake and cappuccino in the museum café that comes with a view to the concrete block on the opposite side of the plaza. The block, it is a museum, too, I realize, hosting a photo exhibition that is called Ohio and shows scenes from the Rhineland. The Gothic church next to it looks like its own replica with its green-capped towers, even though it stands there since centuries.

I move on to the ground floor. Donald Judd is waiting there, together with a brochure that explains his work. An art manual, sixteen pages, a paper guide, put together for this retrospective. I walk into the first room, which is named ‘Room 2.’ It holds empty space, a grey floor, grey walls. In the middle, four cubes, made of metal. In my mind, a feeling of déjà-vu. It’s the first time I am here, but I have seen this before, I am sure. Standing there, in front of the metal cubes, I try to remember, but to no avail. Irritated by the sight and by the feeling, I open the brochure. To my surprise, it knows the answer. The first lines of the introduction, they tell me to „see and think and think and see, until it makes sense.“ So I try. To see and think. To think and see. And then I see it. The plate on the wall. „Tate Modern, London.“ That is where the exhibition was formed. That is where I have been standing in front of these cubes before. Now we meet again. I wonder how they have travelled, I try to imagine the people who had wrapped them up, secured them in huge boxes, drove them to the airport. My eyes keep seeing, while I keep thinking, and imagining. Then I realize that someone is watching me. The museum attendant.

„I have seen them before,“ I explain. To my surprise, he answers. „I see them every day,“ he says. To work in a museum, I think. To be surrounded by art all day. „How does it feel?“ He considers his answer for a moment. Looks around, as if he hasn’t seen the room from this point of view before. „I’m not an art expert,“ he tells me. „Personally, I favour the more classic style. Landscapes, or portraits.“

We look at the cubes. Silent and sober they sit in the middle of the room. „It must be interesting, to see them in different light,“ I say. „When you see them every day, the sight of them wears off,“ he answers, „but I think this would happen with every work of art.“ I nod, remembering the Kandinsky, back home, in the floor. Maybe I should move it. Put another painting there. And then see how long the effect lasts, how long it takes for something new and different to turn to something habitual. The cubes catch my attention again. Would I get tired from their appearance, I wonder. „There was a button in the shop on sale last summer,“ the museum attendant answers my unspoken question. „Yellow, with three black spots on it. And underneath them, the line: ‘Ich kann keine Kunst mehr sehen’ – I can’t see no more art.“ He snickers. „Of course, we aren’t allowed to wear them.“

On this note, he says goodbye, and leaves me with the cubes. I leave them, too, and walk into Room 1, which in fact is only accessible through Room 2. A painting there, huge and red. Untitled, like most of Judd’s works. On the floor, some steps from the painting, a red box. His first cube. Made of wood, painted in cadmium. The colour, it is used to sharpen the contours of the object, the brochure explains. Black would blur them, and white would make the object smaller in appearance. The effect of colour, the character of material, the dimensions of space – that is what Judd’s work is about. The connection between object and space, the creation of space through the object. Abstract, one could say. Or: basic.

I see and think. I think and see. I would like to move those cubes, I think. To see. Instead of creating new spaces, I sit down on a bench. A book there. Pictures of the cubes, in other places. In the States. In a factory hall. Flooded by a different light. All the spaces those cubes have created, they form a world of their own.

On the way out, I visit the shop, but can’t find the blind buttons. I pick up a free bookmark instead. „Gibt’s mich wirklich,“ it asks – „Do I really exist.“ No question mark at the end of the question, which isn’t a real question, but the name of an exhibition to happen next month.

Outside, behind the church, it’s small streets, it’s cubes of houses, squares of ways, circles of places. Finally the Rhine, a long body of water, curving towards the horizon, crossed by lines of metal bridges. There are ships, tempting me to sail out of the city, slow and uncubistic, instead of trudging through the maze of streets towards the grungy quarter that hosts the train station. I try not to think and not to see as I walk back. Not that it is that bad. Plus it’s a part of the city, of life, too. After all, the world isn’t a museum. At least none that has defined rooms and regulated opening hours. I follow the sight of the train station’s clock tower. There are some minutes left. Not much to do with them now, here, in this transit zone. I take a last picture. Finally the train arrives.

Inside the cabin, too many people. Or is it me, and the overload of sights seen. Memories of today, they pass me like flocks of ravens, they turn to other directions. My mind chooses to wander off their path, through the moving outside, towards the fields at the horizon. The train doesn’t mind, it moves on, returning me to where I came from, closing the circle.