blueprint21
Start Blog Sol Mirror at MoMA, momentsketchers of the world, Nefertiti next town, and... 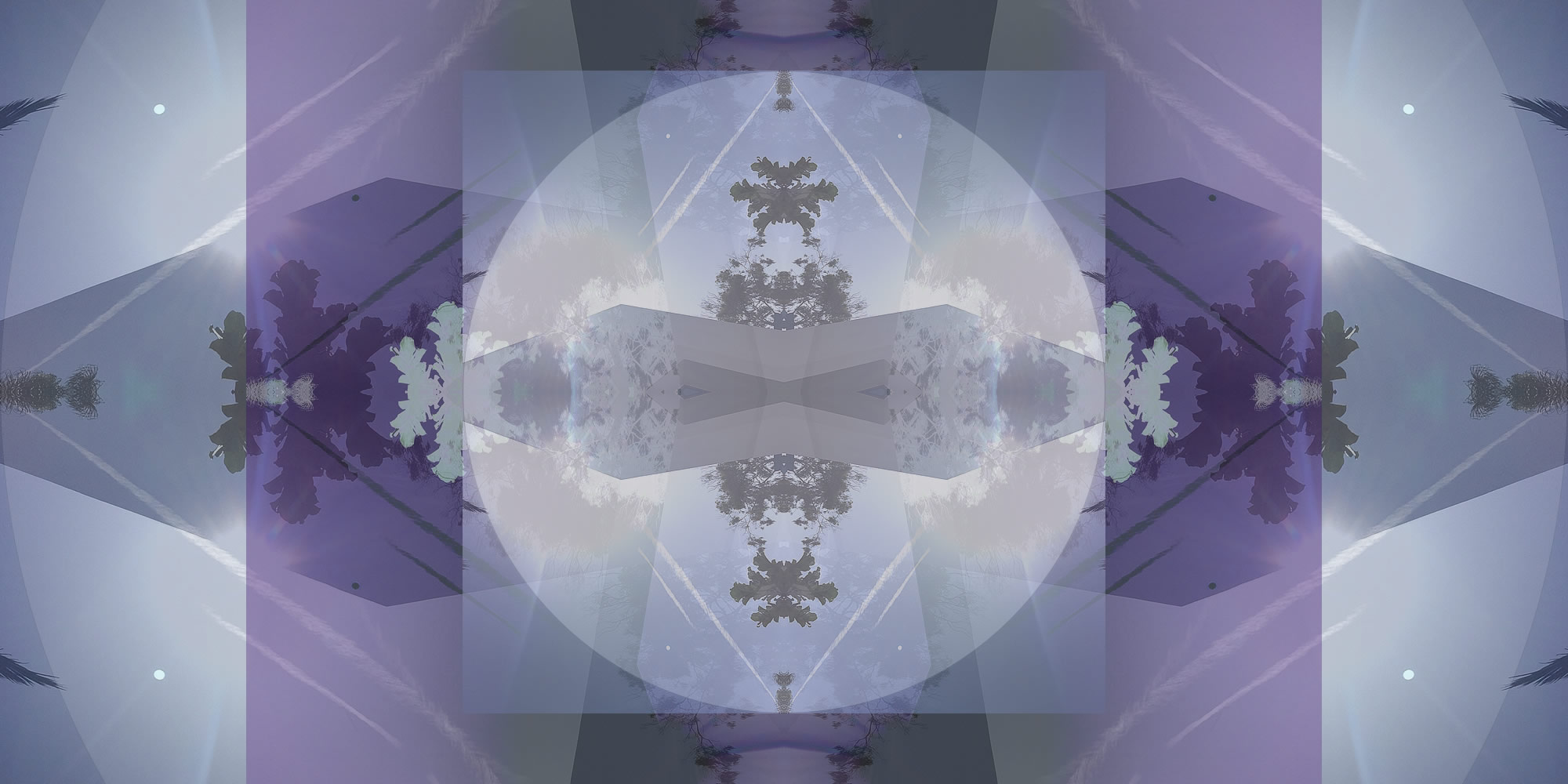 Very excited and happy that my photo installation „Sol Mirror“ is currently on display in New York City as part of the exhibition „In the studio / MoMA digital learning“ at the Museum of Modern Art! 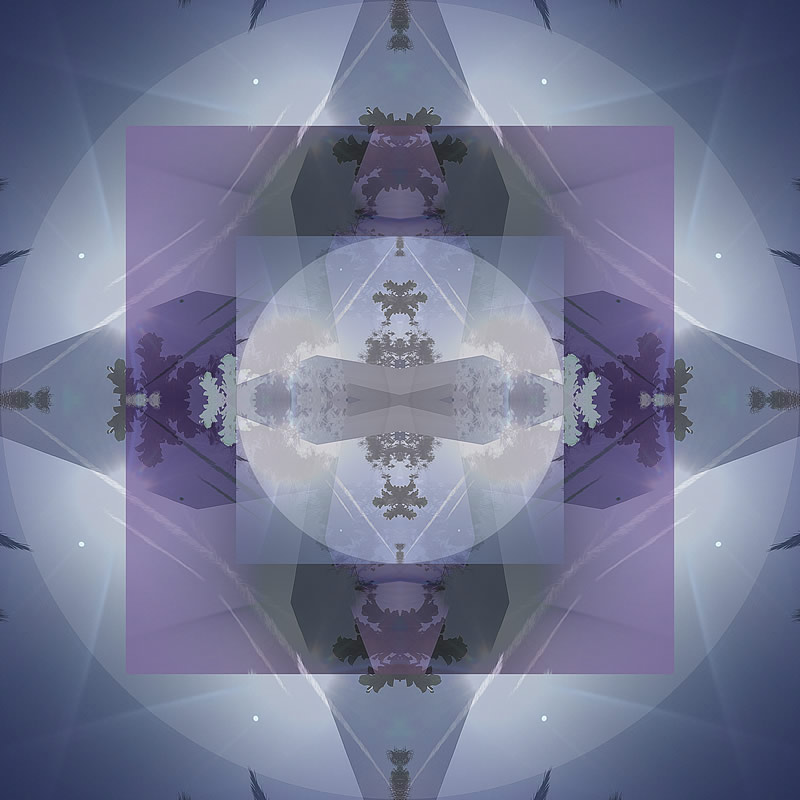 „Sol Mirror“ is based on a sky photo that I took in Lanzarote last December, and the installation is inspired by Yayoi Kusama’s infinity mirrors. Kusama’s work was part of the course „In the studio“, which lead to this group exhibition with artworks from the learning community. I love the way the exhibition brings artworks from around the world together.

From digital to water color:

The open painting initiative Momentsketchers was on again at the first weekend of January. The skies seemed to be in favour of it, too – there was an hour of sunshine, which brought the idea to paint the potted tulips a friend gave me as a gift. Their petals were closed until then, but standing in the sun in the living room, they started to open. 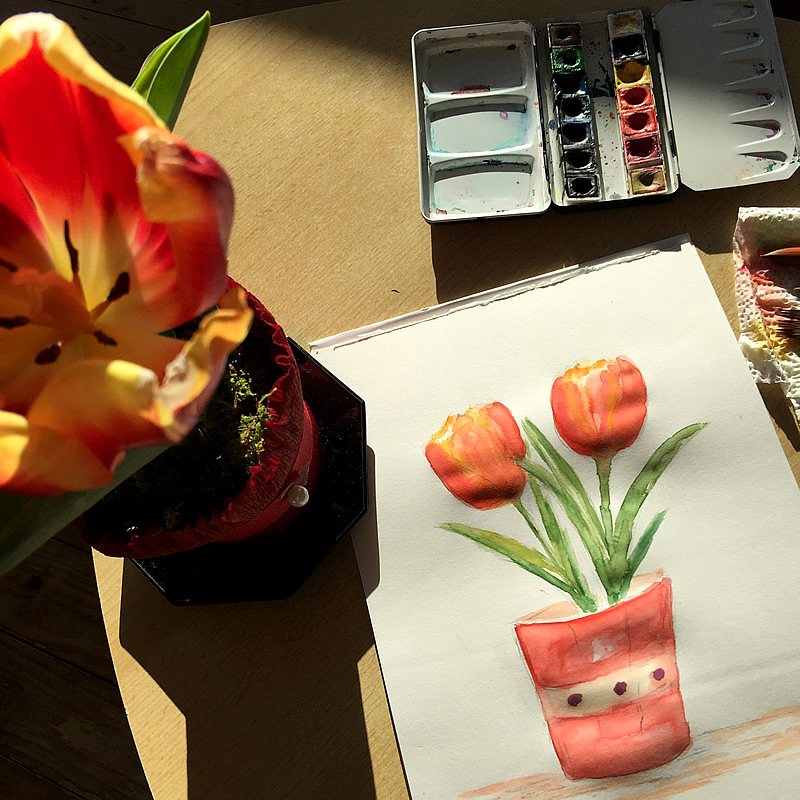 So nice. And others painted flowers, too, which brought chance connections. Now all paintings are up on a collected page at Momentsketchers January

It inlcudes the work of 99 artists in 23 countries. Cancace Rose Rardon, who hosts the project, reflected on that:

„Isn’t it amazing how an ordinary Saturday or Sunday can unfold in so many different ways, depending on where we are in the world? As I’ve been thinking about this new year ahead, the phrase “Share Your World” keeps coming back to me as a kind of unofficial theme.“

Sharing the World / Networking the Unseen

For the start of the year, I checked museum programs, and saw that an interesting-sounding exhibition is up in the Villa Merkel. The title is  „Networking the Unseen“. It is a combination of australian native artists and works, contrasted with european artists that work with digital works.

One of the biggest surprises it held was: walking into a room, and standing in front of the Nefertitit statue. The statue looks almost like the original I’ve seen in Berlin some years ago. Turns out, it is based on the original data, which was shared to the world by artists in the so-called Nefertitihack. 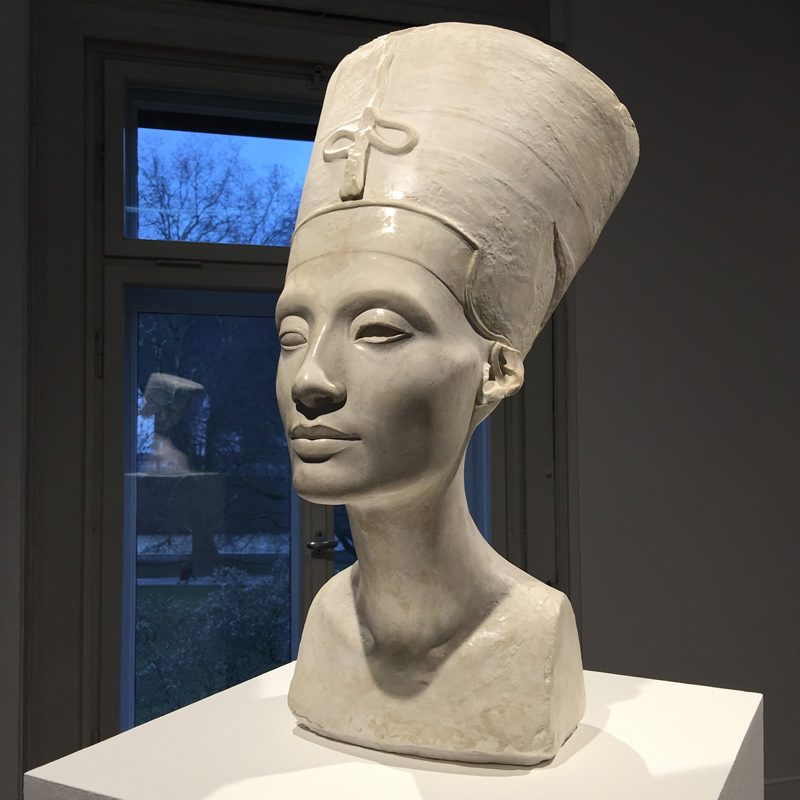 Looking at the photo, I notice the reflection in the mirror, which looks like a giant outside sculpture.

Walking through the exhibition was like a reflection on the nature of time and the world, the past and the digital options of our present time, which sometimes already feels like futureworld. Here’s a note from the exhibition statement:

„In this historical moment of intense, rapid, and widespread transformation as a result of digitalisation, the exhibition presents artists who are grappling with the ramifications of advancing technologies on cultural traditions, nature, art, the individual, and the society within which they live.“

The vibe of the visit, together with the Australian works, later inspired a colourful digital image, it’s up in Instagram: Color of Courage 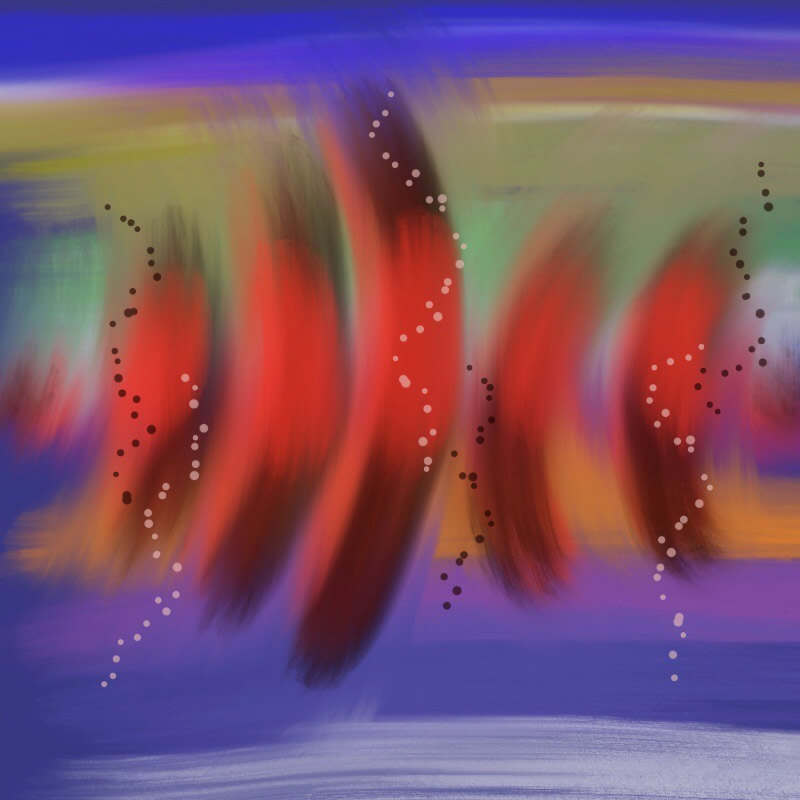 Starting the year with symbols + a sundog

This week also brought back the art academy – the courses continue now after the winter pause. It was good to be back there. In our painting class, we started with oil colors. Will write about it more in the next blog.

Altogether, these first 2 weeks felt symbolic – or to put it the other way round: I actively tried to inclued symbolic activities into these first 2 weeks: taking time to paint, both in watercolors and in digital, going to the cinema to see „Loving Vincent“, going to Qi Gong class, watching a photography docu, driving to the Alb for some scenic countrytime, going to the library.. and seeing a sundog on the way. Such a nice chance encounter: 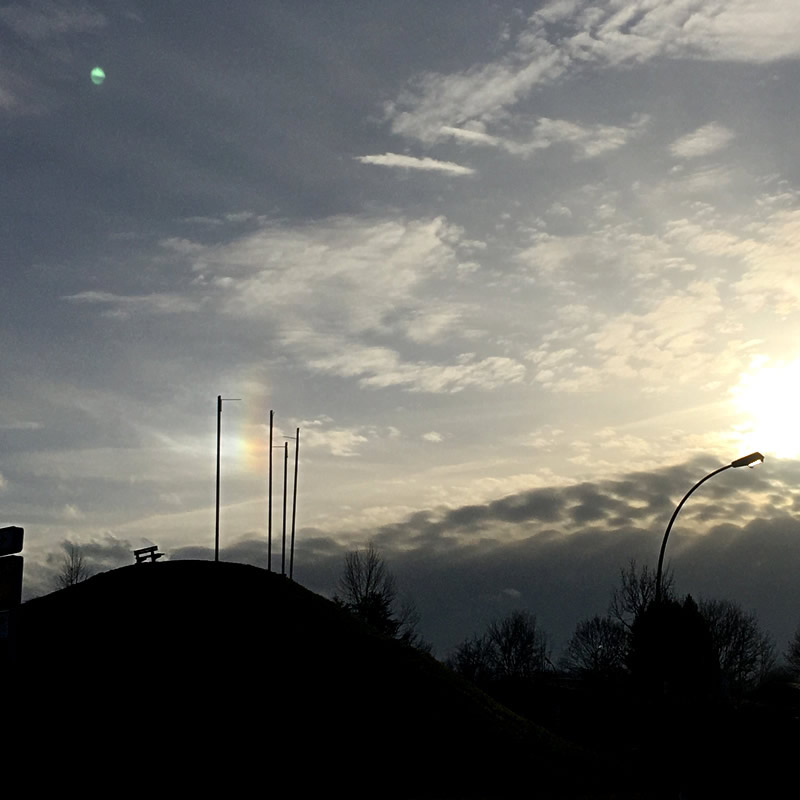 Glad I spotted it before the clouds moved in. The sundog is between the lampposts, same horizontal line like the sun, it is an air reflection. It felt like a good sky sign.

On the downside of skies, temperatures have been too mild in the last weeks. It’s irritating for plants and humans. The mild weather also made hazelnut think it’s spring upcoming, and they are producing pollen already – to which I am allergic. Hello, spring allergy in January…

Plus, it felt the weeks don’t have enough time. Whatever I do, I find myself wishing for extra time: working, going places, writing, reading… it’s both good, to have so many good threads weaving through the week, but also demanding. How to find balance?

But at least the fear I had for a while, that I caught a cold, turned out to be: just the allergy. I will try and make friends with the pollen… tell my immune system to focus on the real enemy, not the hazelnut.

And a good creative quote on balance, to round up the mail:

Balance is
not something you find.

It is something
you create.