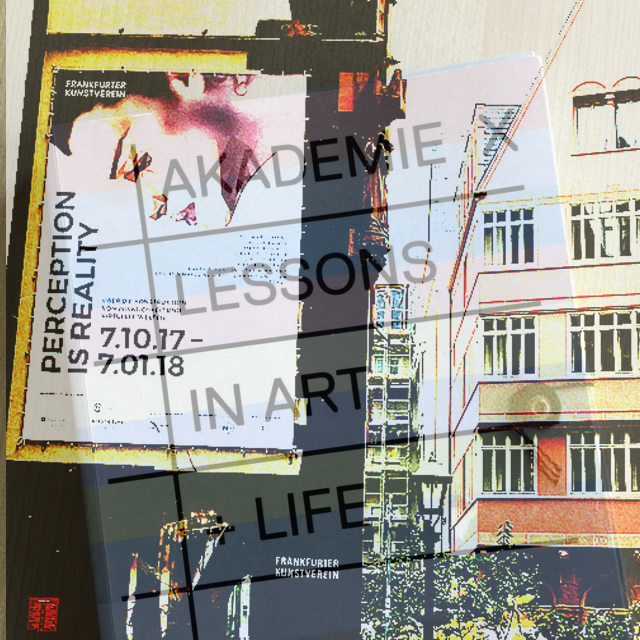 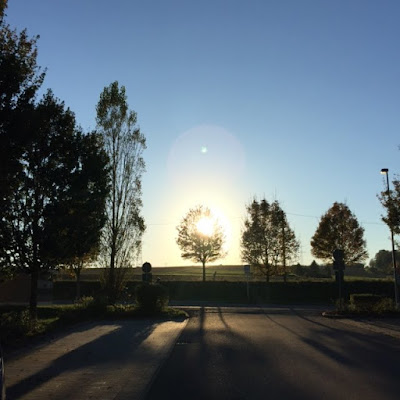 It’s this time of year again: summer fading and autumn entering in yellow days. Which can turn a simple drive to the supermarket into a visual spectacle. The photo? It’s right from the supermarket parking spot. A boring place when it’s overcast and busy. But yesterday was sunny – so I delayed the drive, and arrived there in this unplanned perfect tree-light-shadow moment.

More sun-inspired images: the sky cleared during Friday, and in the evening, we went for a walk at sunset time. I didn’t have my camera, which probably was a good thing, as this gave me an instant opportunity to follow the advice of my new art teacher:

„If you see something interesting, spent time with it, and notice what draws your attention most – and then paint from there. If you still want to take a photo as reference, try to paint without the photo first. The camera looks in a technical way, not like an artist.“ 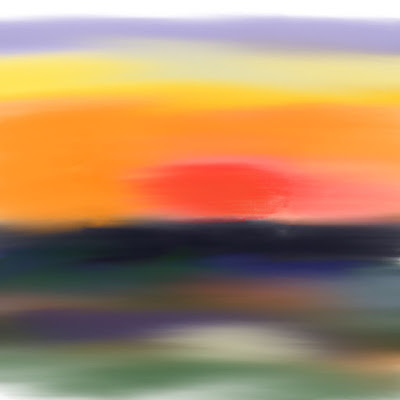 And yes! I have a new art teacher. Or rather: several new art teachers. Since Monday, I am guest student at the Nürtingen art academy. I woke up early on Monday morning, with the Elton John song playing in my mind: “It’s a little bit funny, this feeling inside….”

And parallel with that, the 4 words of advice opened up: “enjoy more, worry less”. I guess it’s not just accidentally that I put the visual together last week: it’s my subconscious leading.

At the art academy, the rough plan is that I can take two courses as guest student and go to some of the art talks. In the course of this week, I became a first idea of everything: the place, the tutors, the other students, the atmosphere…  In the next 2-3 weeks I can try different courses, and then make a definite decision which ones I will join.

„What will you learn?“ – a friend asked. Smile. I don’t really know yet. I initially went there thinking that I will take a painting course, then met the photography tutor – and realized that would be a pretty interesting class for me, too. The good thing is: I don’t have to choose upfront, but can get a first idea of the different classes in the first 2 week. Right now, it looks like I will pick the painting course, and the photography course. They both combine of technical / theoeretical / and practical elements.

There also is more space than I expected for students to bring in themes, and to look at art together, to talk and reflect on viewpoints on art. There are also joined museum visits planned. So I hope, it’s kind of a multi-layered learning and getting-to-know and hopefully good encounters with others.

In the last weeks, I playfully browsed my bookshelves to see which books on art I own, and came across this one again: 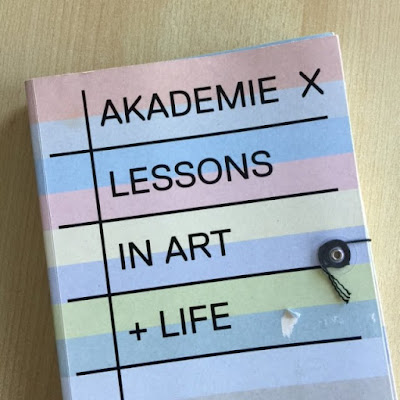 I bought it last year, in Cologne, at the Gamescom-weekend. I was there for some meet-ups on Friday and to go to the fair, and had some time to also visit the Cologne museum. Which has a bookstore. I remember how I saw the book, and picked it up, put it down again. Read the text on the back: 36 ‚tutors‘ share their experience, wisdom, techniques + philosophies on art + life.

It’s a heavy book, and I knew I would have to carry it – but I also knew that it’s a book for me. So I bought it. Now it feels like a hint to myself. Nice parallel: the tutors in the book are artists. Much like at the art academy. Same with some of the notions expressed in the book. Here’s a quote from the book, from Olafur Eliasson, that gives an idea (the full text is up at Artspace, and a PDF of his full contribution to the book is up at Raumexperimente).

„We try to learn how to learn, so we learn where we have to go by going. We evaluate and critique ourselves along the way, and together, and always, and all ways. We invite other artists and practitioners to think and do with us. We believe in risking vulnerability and practicing in the robust discomfort of uncertainty. A shared vulnerability is important. We believe in getting out of our comfort zone.…. School is not a place for a safe enclosure of lessons. School is an amplifier for the world. Lessons are not fixed ahead of time or they become rules. Dogmatic. Concrete. Belaboured. The syllabus is written after the course ends. The course is endless. … Everyone participating shapes the lesson, makes the lesson more, makes the lesson on.“

From art.. to Frankfurt bookfair, and to the ARTs

After the introduction at the art academy, I went and packed my bag, as the Frankfurt Bookfair was waiting. I probably would have skipped it, but my aunt lives near Frankfurt, and so it’s a good occasion to meet up. Plus, since last year, the bookfair has a focus area on art, too. Plus, as it turned out, there is an art exhibition on in Frankfurt, recommended by the photo tutor. „So I try to fit that in, too,“ I thought. And learned: once you start looking for options, you might just find new ways to approach things. 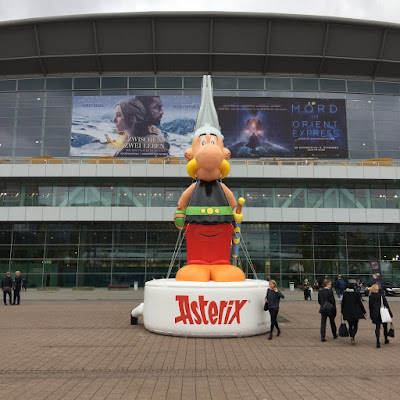 To avoid morning traffic, and to have more time, I drove to Frankfurt in the afternoon and arrived in time for dinner at my aunt’s place. The next morning, I was at the bookfair before 10 – a good time to start. There was a talk about the trends and future of self publishing and how there are more and more „hybrid“ authors and also publishers, which are active both in a traditional way, but also as self publishers. That was pretty interesting as starting point.

A theme I looked for were: comics, as I blogged from there for myComics, with suggestions where to go for comic readers and artists. The blog post with a lot of book fair pics is up here, in German. 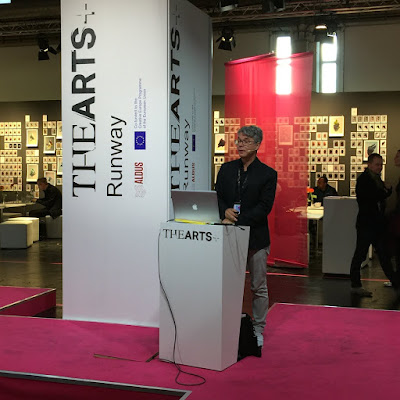 And I went to the ARTs section – it wasn’t crowded yet, and one of the unexpected highlights for me was the Google Education booth, they showed their Virtual Reality / 360°view headset learning program, it was so interesting to try that and get an idea. And there was a virtual ride in the next booth, a visit to Venice. I didn’t even have to wait for that.

Plus, there were interesting talks, and author interviews.. it is really more about the interaction than the books itself. My mobile phone put a video together with the photos of that day, it gives a good idea of the sights and themes:

From the fair, I took the s-train to Frankfurt city, and enjoyed the contrast: from book fair to the real city, and then to the Schirn museum. The exhibitionI visited was: „Diorama – the Cultural History of Vision“. 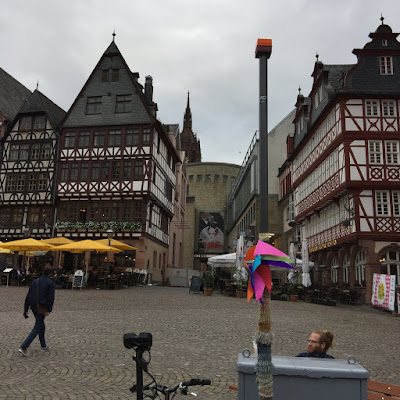 (Frankfurt centre „Römer“ with guerilla knitting, the Schirn museum is in the background.)

Here’s the definition of Diorama: „it can either refer to a 19th-century mobile theatre device, or, in modern usage, a three-dimensional full-size or miniature model, sometimes enclosed in a glass showcase for a museum. Dioramas are often built by hobbyists as part of related hobbies“ (Wiki-article)

The base idea of it, especially when showing artefacts in museums, is to give visual context. And our main focus of perception is: visual. We tend to think that what we see is more or less the reality. 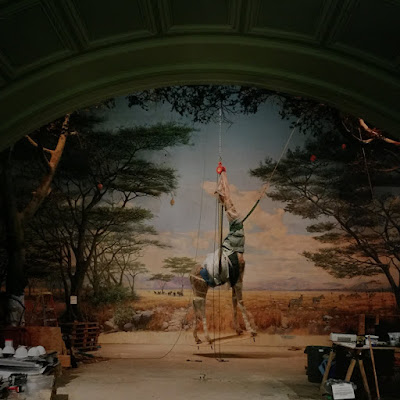 (photo of the building of a diorama)

But if you move the focus on the process of how to create dioramas – or portraits, or advertising photos etc. etc. – you start to see that of course, they often aren’t „simple“ reality, but tend to be a staged version of objects.

Even when we „just take a photo“, we pick the frame of it with our camera. In some ways, each photo is a „diorama“, a box of visual content that is part of a larger setting.

It was a rather different, and rather thought-provoking exhibition.

The Schirn museum is right in the city centre of Frankfurt. I went to a café there afterwards, and saw the sign of another exhibition that picks up the visual theme, too: „Perception is Reality – On the construction of Reality and Virtual Worlds“: „The invited artists will examine the new conditions of human perception in relation to technically constructed realities. As one of the first exhibition houses in Germany, the Frankfurter Kunstverein will integrate a new forward-looking medium, virtual reality, into a contemporary art exhibition.“ 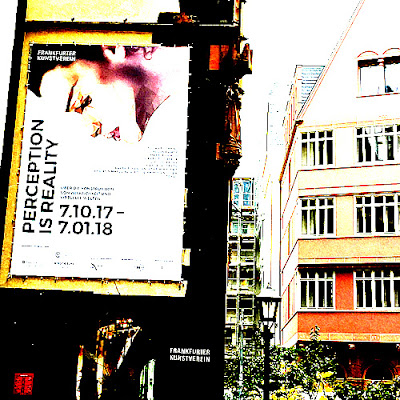 
The art of juggling art + other times
Altogether, the week was an intense one, but full of impressions and newness. And the weekend was summer-like, with space to reflect and to revisit, and to just be. Looking at the past week, and the upcoming one, a thought surfaced again:

That for me, the way to juggle the different themes probably is: by combining them. like: combining the trip to the bookfair with a visit to my aunt, and a visit to the museum.

The theme that was missing this week, though, was: writing, especially preparing for Nanowrimo. But hopefully, there will be more space for words next week. Well, and I wrote 2 longer mails, with reflections, and this weekly blog post – I just counted, it’s 1500 words (hello nano-wordcounts..)

I already look forward to the upcoming days.