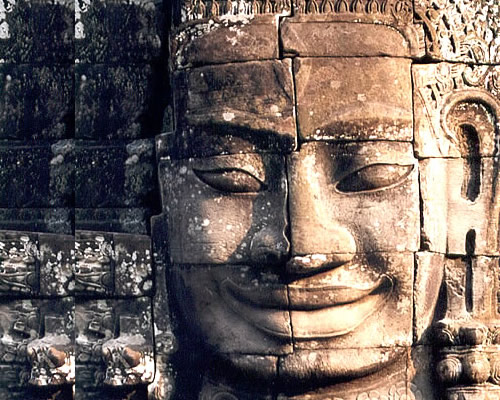 A travel story from Cambodia.

The Buddha, the Dharma, the Sangha

Towns are made of houses and streets. To get from one place to another, you either walk, or take a car. Rivers are crossed by bridges. Streets connect to other streets that connect to other towns. That is what I learned when I was a child. Back then, I couldn’t imagine the counterpart. Had never been in a place that was based on a completely different concept. Had never been at a border where the street ended.

“To cross into Cambodia, you take the boat,” the man in the Sawadee guesthouse in Trat says to me. “There is no bus?” I ask. He shakes his head, realizing that I still haven’t got the point. “There is no street,” he explains. I don’t believe it. “How do people get from town to town then,” I object. “They take the boat,” he says, bringing us right back to the starting point of the conversation.

So I take the boat. Which in this case is the one ferry that crosses the border, each day at exactly 8 o’clock. Neither sooner, nor later. Mini boats get you to the docking point named Kroh Koh Kong. There also is a hotel, right there at the dock, for all those who missed the ferry. For all the others, there are moto taxis waiting at the exit ramp of Sihanoukville. After all, there are some roads. Also a beach called Serendipity. Restaurants with extended menus that reach from fried crickets to lizard curry. Guesthouses with running water, warm and cold. And with a tiny temple next to the door, to give the gods and ghosts of this piece of land a sheltered place to live in. The incense sticks in front of the temple door are glowing, morning, noon, evening, night. Next to them, symbolic offerings. Rice, in a small pile. Tiny bananas. And water in a plastic bottle, the cap put neatly next to it, so that the gods and ghosts can take their sips without effort. Beggars won’t take from it, I learn. It would give bad karma.

“And for good karma?” I ask the woman in the restaurant.

She looks at me as if I am an alien. Maybe I am, in her eyes.

“I will travel to the North tomorrow,” I explain.

She circles her head three times, in thought.

“Go to the temple and offer,” she finally advises.

It sounds simple, but I don’t know where to start. To which temple should I go? And what should I offer? On the way back to the guesthouse, I wait for a temple to appear somewhere along the road. None does. So I skip the offering, and start to pack my things.

The next morning, I board not a boat, but a bus. Sihanoukville to Phnom Penh, deluxe, the ticket promises. Turns out it tells the truth. The bus comes with air conditioning and upholstered seats. The road is new. Yet, that doesn’t mean things have changed. Rumors have it that the streets of Phnom Penh still aren’t safe after dusk. In a belated gesture of committing to karma, I take a room in the Bodhi Tree guesthouse. A sign in the room announces that checkout time is 11 a.m., and that all weapons are to be given into custody of the guesthouse owner.

“It’s the law to have those plates,” Nohn, the receptionist, explains to me. When he sees my concerned look, he tells me that there is no real reason to worry about safety.

“It’s not that bad,” he says. “Just make sure that you don’t walk in the evening, but take a moto taxi. And for all cases, have a ten dollar note in your shirt pocket, easy to access.”

He puts up his thumb, then points at his own shirt with his index finger. His shirt is black, with a white line printed on it. “I have a lot of dreams about flying,” it states. But it’s not what he means. “Ten dollars,” he explains. “It is the running rate for being held at gunpoint.”

His face beams. “Yes!” he says. The alien has understood.

I swallow, and then search my bag for the guidebook. “Maybe I should read the chapter about Phnom Penh again, before I head for the city center,” I say, and withdraw into the shade of the trees that frame the small guesthouse terrace, to find my orientation again, at least on the map. There is no spot marking the guesthouse, but I know it’s somewhere between the icons that locate the Russian Market and the Toul Sleng Museum . Other icons suggest visits to the Royal Palace and the Silver Pagoda. Also there are the temples: Wat Phnom, the one that gave the city its name. Wat Ounalom, at the riverside of the Tonle Sap, the river that will carry me to the next destination: the jungle temples of Angkor Wat. But that is yet to come. Now it’s figuring out what place to visit first, and how to get there. I study the map again. Then I walk back to the reception desk, to ask some more first timer questions.

“You could, but I would rather take a moto taxi,” he suggests, “you don’t want to get lost on your first day here.”

“Not really, no,” I admit, and move to the next place. “And the Toul Sleng prison museum?”

I turn around, and try to identify it in the line of houses. It can’t be. There is no prison there. Just common buildings.

“It used to be a public school,” Nohn explains. “Then the Khmer Rouge turned it into a prison.”

“A school?” I ask, still startled by the fact that a place where hundreds of people were tortured to death can look so casual in a street. That it is not somewhere remote, but right in the middle of a neighborhood.

Nohn looks at me. Then he circles his head, in thought, in the same way the woman in the restaurant did. And like her, he offers a clue of understanding.

“At that time, they shot people who wore glasses,” he says. “It was a sign of being an intellectual.“

I still try to grasp what I just learned when I walk out to the street. There are already moto taxi drivers waiting. “To Wat Phnom,” I tell the first of them, and add the fare that Nohn suggested, 800 riel. The driver nods. I get on the back seat, and let the buildings and streets of an unknown city float by, catching glimpses in passing. A street corner store on wheels. A family with five children on one moto bike. An obelisk in a roundabout, shining in white. An avenue that looks like built in France .

It’s when we drive around the oblique for the second time that I know something is wrong. I gesture to the driver, but he keeps driving. Then he abruptly stops, at a crowded corner, in between other moto bikes. He waves to a guy in a leather jacket, who turns around and reaches for something in his jacket. That’s it, it hits me. Now he will draw a gun. Even before it’s dusk. Even before I took the time to put the ten dollars in my shirt pocket.

Now what? I stare at the man in the leather jacket, trying to come up with a plan. And see him – drawing a map.

“Towat, towat,” my driver says to him, and gestures at me.

Then they both stare at me. “Towat, towat,” the driver says again.

It takes another minute until I understand. The driver doesn’t know English. He actually has no idea where I want to go. But he knew that the man in the jacket has a map. So maybe it’s not that unusual a happening.

Together we try to find Wat Phnom on the map. After we solved that riddle, he gets me there, no problem. It’s not even far from the obelisk. Just a couple of streets down, and there they are, the temple gates, and beyond them, the ornamented buildings with steep roofs that rise in three symbolic levels, one for the Buddha, one for the Dharma, and one for the Sangha.

“Thanks,” I say to the driver, and pay the fare. Then I turn and walk through the gates, towards the temple, to offer the ten dollar’s worth of my present life. Kneeling there, in front of the incense sticks, I wait for some kind of emotional echo to the offering, a feel of outer serenity – or at least security – reflecting inside. The shine, though, stays distant. Would have been too easy, I think.

It’s only later, when I walk the street that surrounds the temple, when I take a moto taxi to get back to the guesthouse, that I realize something has changed. The world outside, it feels denser, closer. There are details, moments that leap into the presence of now, touching me: an old woman carrying a basket full of wood on her head, her hair covered in a krana, one of these black-and white patterned scarves that protect the hair from the dust. A young girl lighting some incense sticks in front of a house temple. A kid appearing on the street, looking at me with big dark eyes, eyes that greet me in a language I didn’t even know I was able to understand.

Back at the Bodhi Tree Guesthouse, Nohn asks me how I liked Wat Phnom. “It’s special,” I say.

He studies my face for a moment, and I wonder whether the story that happened is written all over it. If so, he doesn’t comment on it. “You want a ginger tea?” he asks instead.

“That would be perfect,” I say, and look for a shady place on the small terrace. I open the guidebook again, turn the page to Angkor Wat. The photos of ancient stones, of gods lost and found in a jungle, feel strangely comforting. Being there, it will be like being in a museum. Or not?

The ginger tea arrives. I expect a cup with a tea bag inside, accompanied by some sugar cubes. I couldn’t have been more wrong. I am served a tall glass that hosts a flurry of ginger pieces in hot water, accompanied by a pot of honey.

Amazed, I stare at it. Ginger soup, I think.

I point at the tea. “That’s how Cambodia is,” I explain. “Back home, you would just get a taste of it. Here, you get the full flavor.”

Nohn looks at me, then at the tea glass. I think of a way to tell him about the soup thought without being offensive, but before I need to make a try, Nohn’s eyes start to shine with understanding and amusement, and we both start to laugh.

The next day, I ask him about Angkor .

“It’s like ginger tea,” he says. “I could tell you stories about it. You could read all those books about it. But there is no real way to describe it. You need to go there.”

“Yes,” I say, and smile as I return to the question that seems to accompany me through this journey. “But how do I get there, by road or by boat?”

Nohn smiles. “There’s no road. But there is a boat.”

And of course, it leaves at dawn, at the time when dreams merge with reality. Travel Time, I write in my tiny diary, and pack my bags once more.