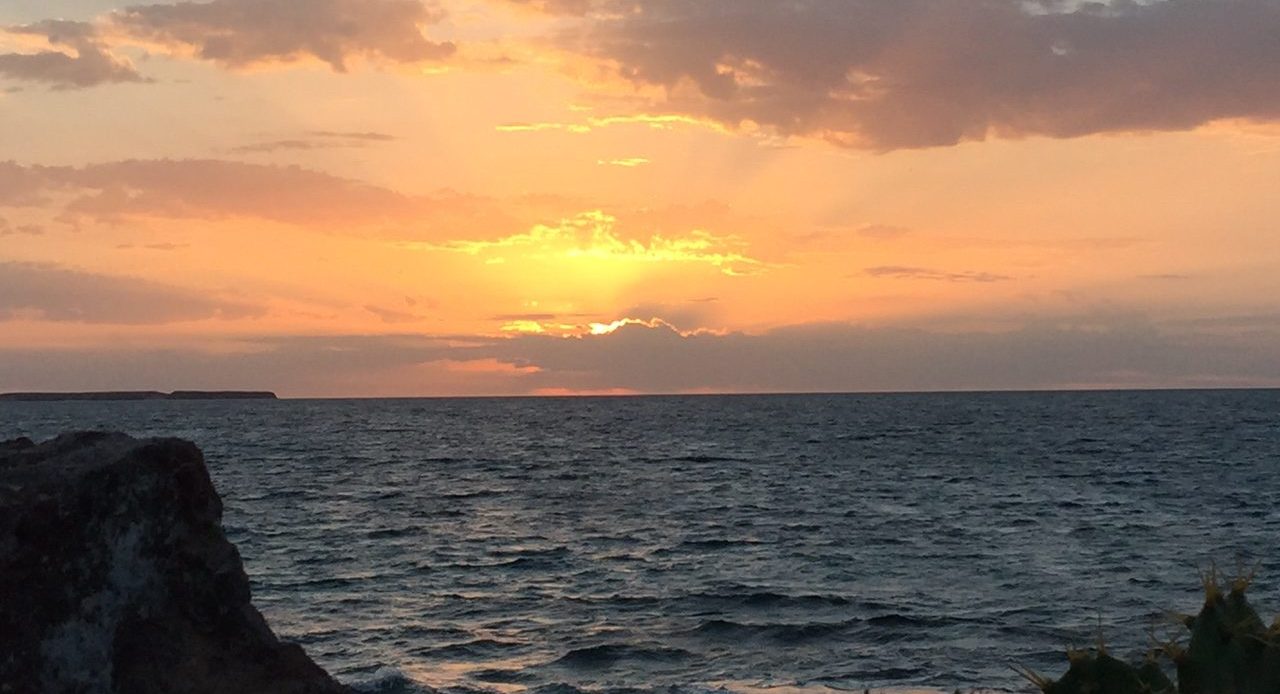 Greetings from the Canary Islands!

I am writing this with a view to a blue sky with some hazy clouds, and palm leaves waving in the Atlantic breeze, together with some wind-happy Christmas decoration.

Yesterday, I went for a long walk along the beach, thinking about the last weeks, and months, and years… the unexpected turns my life took. How, when the odds had turned out differently, the island time 3 years ago might have been the final island stay for me. How this feels unreal, yet the realization of those odds still linger with me, or rather: have turned into a part of my world now. One that in the sum of things, beyond the fear it induced, makes me more grateful. To be alive: it’s something we take for granted, until it’s in limbo for a while.

Not sure why the shore makes it easier to write and reflect about those huge themes. Maybe it’s the endless coming and going of waves, the sky reflected in the water, the feeling of open horizon, of time floating since eons. 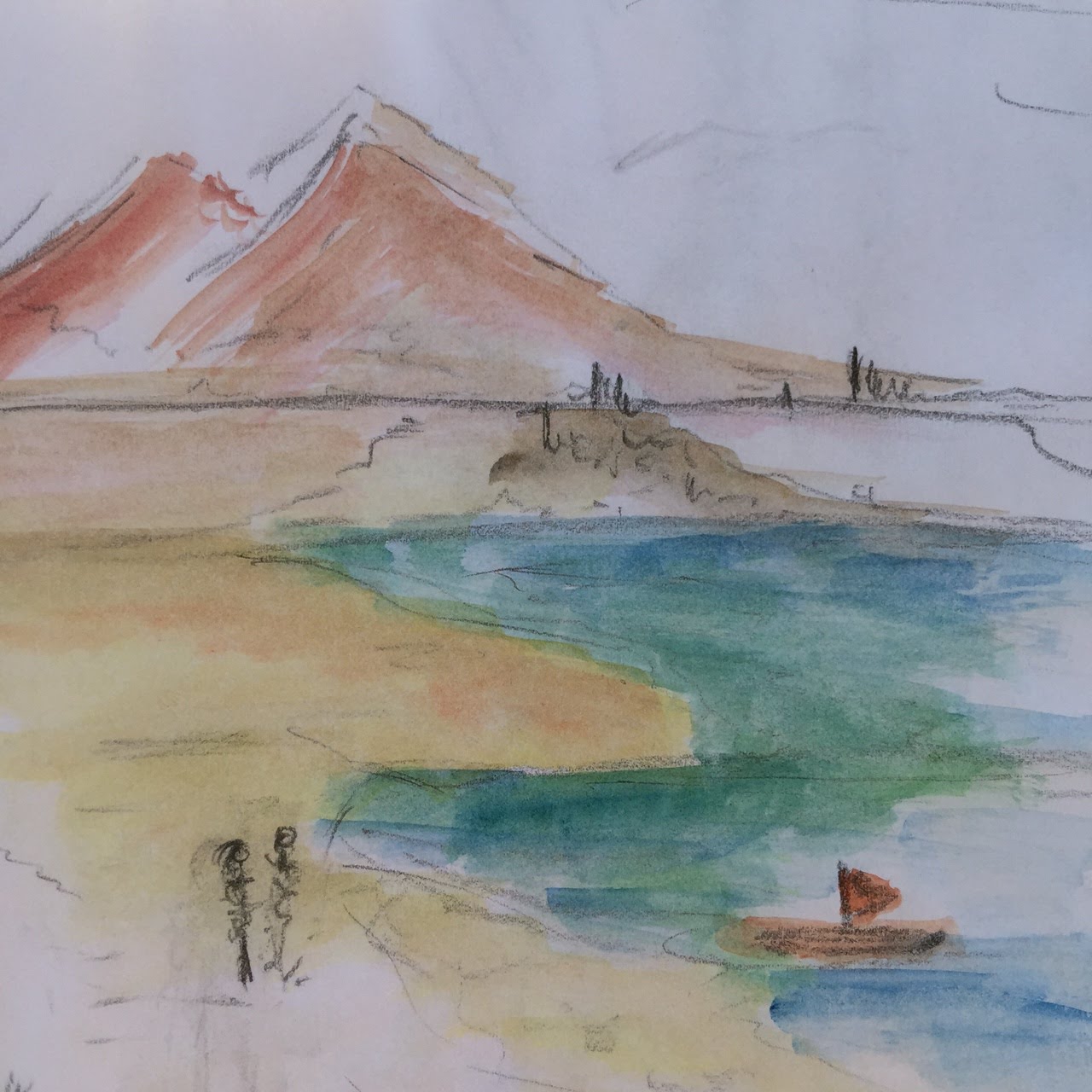 A friend wrote and asked: „How is your travel? How does it feel to return to the same place time and again? I have never done that.“

It’s just the right thing for me, right now, to be here, I wrote back: To travel by returning to the same place every once in a while: Lanzarote, it is a relax/retreat/revisit/reflect place for me. Like having a little summer house somewhere, and when you go there, it isn’t so much about exploring a new country and its sights, but more like a living-in-another hemisphere, in another rhythm, for a bit of time.

I am missing the art academy, though – everything there is still so fresh and new. But I brought a sketchbook, and my aquarelles. It’s different, to sketch a scene that way, sit down at a lava stone and connect with the landscape in a sketch. And later, back home, color it. This isn’t for perfection, it’s more for that feeling of being in tune: 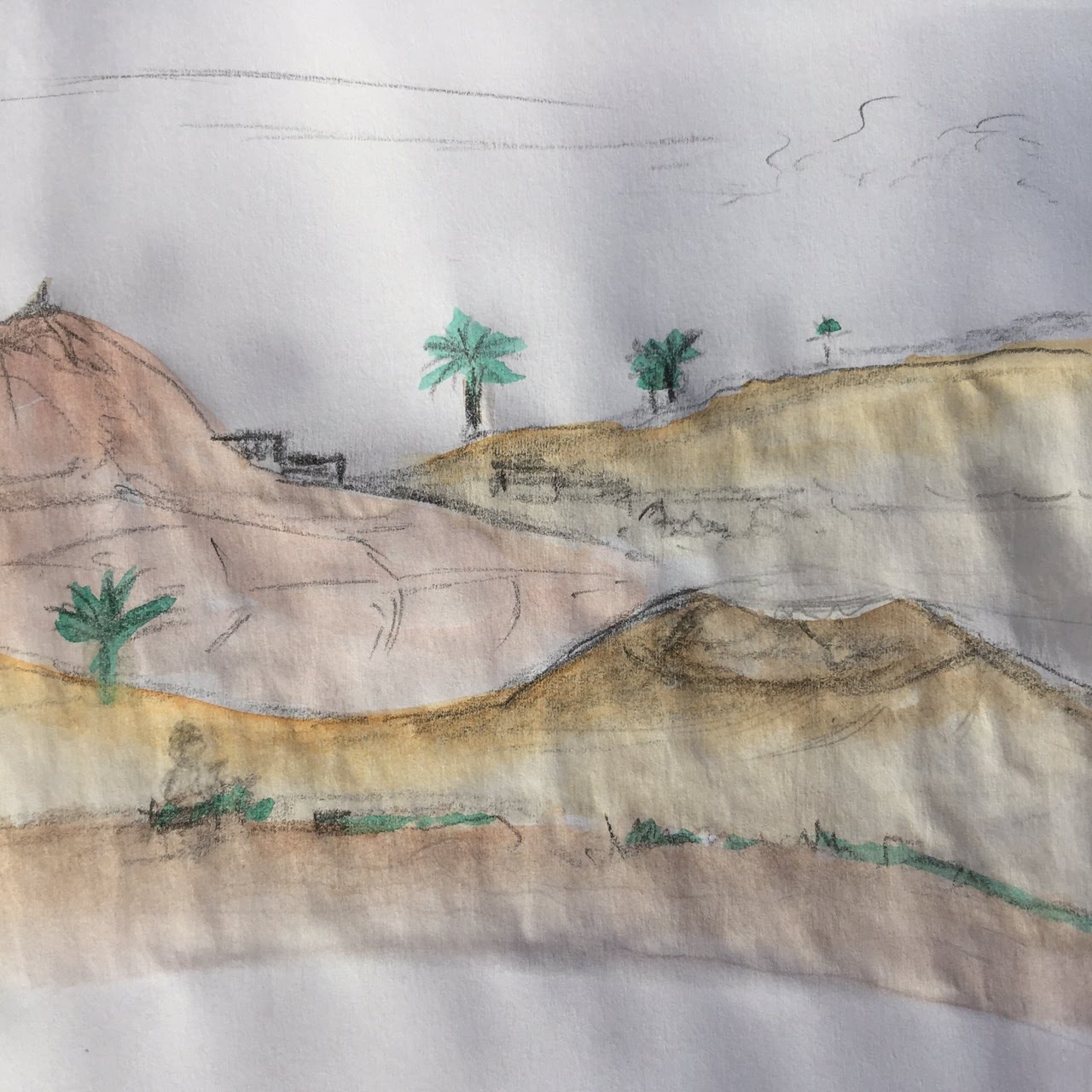 The island break, I hadn’t thought of it that way, but it also brings an idea how the longer semester breaks will feel. It’s here, while away, that I wonder and start to collect ideas of   how to stay in the flow of art topics and practice during the longer break between academy semesters.

Being here, in this place I’ve visited before, also brings back memories and stories. Like the story below, „La Isla“. It is a story I wrote a while ago, and it’s one of the stories I return to when I am here, and revisit again.

Which now lead to an idea: that I want to revisit more of my stories in winter time, and during the semester breaks, both short stories and travelogues, but also digital works and photos. And so, in the next months, walk the shore of my past words and images – and create an own kind of journey with them.

This is the starting point: 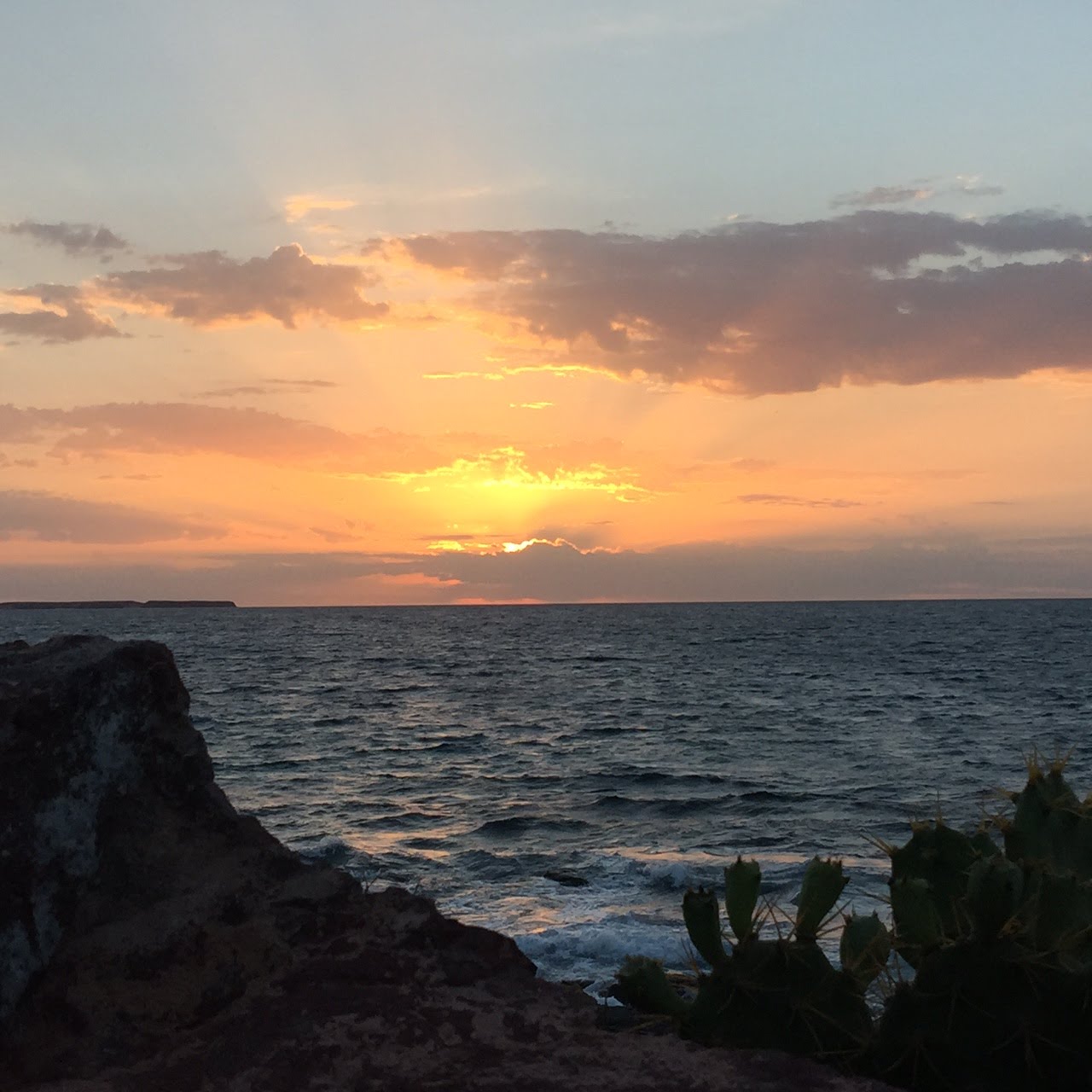 There was something magical about the island. Maybe it was the closeness to the elements that made the difference, the presence of those fire mountains that were only sleeping, that would wake again one day.

Isla de fuerta, the island once was named. Now it is called Lanzarote. She had been there years ago, in the time before digital cameras, in the time of just taking a few photos with a pocket camera. The intensity of its colours remained in her memory anyway. The white houses. The black beaches. The red hills. The green plants that were growing on lava earth. The blue water. And the sand that sometimes was carried by the wind, all the way from the Sahara, white like snow.

When she woke the next morning, she looked out of the window, and was drawn to the beach. She walked through the sand barefoot. Picked up a black stone and a white shell. Like back then. She even remembered the words she had learned, all those years ago, those Spanish basics of life: Yo soy – I am. Tu eres – You are. And the common greeting phrase: Buenos Dias. Good Day. 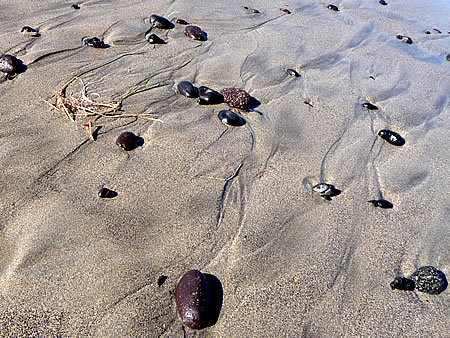 Everything was moving there, every single grain of sand. That’s what she realized some days later, at the beach, where she stood still and watched the wind move across the ground. And was stunned. For what she saw was the miniature of a dune desert: the beach, a lake of motion, a genesis of sand, following the path of the wind. She kneeled down, and touched one of the tiny dunes, wondering where it came from, and how far it could travel. The dune gave its answer by gliding on underneath her hand.

Back at the bungalow, she looked for a book to read and picked up the one she brought from the library, a book of essays from Adolf Muschg, titled „Die Insel, die Kolumbus nicht gefunden hat“ – „The island that Columbus hasn’t found.“ The book, it was about Japan, not about Lanzarote. She knew that much when she picked it, without idea how fitting it was nevertheless: one of the places Kolumbus wanted to find was Nippon, this city Marco Polo told silver roof stories about. And the islands Kolumbus started his journey from was – the Canary Islands. The very string of islands Lanzarote belonged to.

In those days, Lanzarote was covered with forest. Later, the forest was turned to sailing boats by the Spanish sailors and the army. A fact that was hard to believe when you saw the effort it nowadays took to just grow one single grapevine. 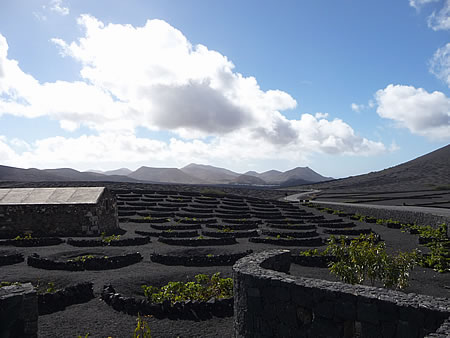 To protect the plants from the wind, and with it, from the moving sand, the farmers built strings of stone circles on their fields, which made the fields look like landscapes of abstract art. The wind didn’t seem to mind. It kept blowing, across the fields, across the mountains, changing its direction with the names of the days, lunes to jueves, viernes to domingo.

The story of Columbus made her curious for more snippets of history, and so she headed towards Teguise, the oldest town of the island. 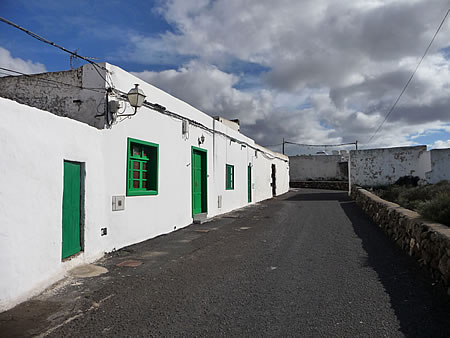 There, she learned that the first settlers of Lanzarote probably were Arab Berber groups who sailed to the islands from North Africa. After the Berbers came the Spanish sailors, in the 13th century. And with them came colonialization. And the slave trade.

Walking down the streets, she tried to imagine life back then, and arrived at the church in the middle of Teguise: Nuestra Senora de Guadalupe, it was called. She tested the doors, but they were closed. 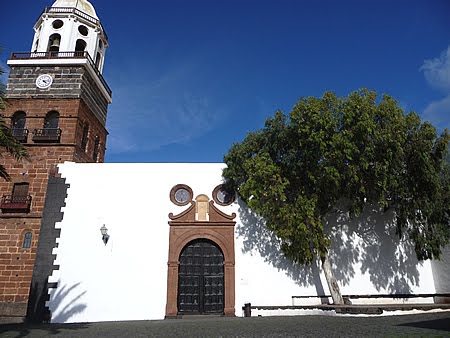 In a sidestreet, she noticed a flag, it’s presence a reminder of the closeness to Africa and the ongoing conflicts there. The flag, it carried a plea for a different life, noted not in Arab or English, but in French: Sahara Libre.

Back in her apartment, she looked up Arab key phrases and words, something she had never done before. The first word she learned was marhaban – which meant Hello. And next, in the unyielding logic of being, ila al’likaa – Goodbye.

That evening, in good time for sunset, she went for a walk along the shores of the island. She watched the seagulls while she followed the curved line that separated water from sand. The sky kept changing its color as the sun neared the horizon. She took a photo, then another, and kept walking, on and on, until it was only her and the ocean, her and das Meer, her and la mare.

Walking back, she followed her own trails for a while, and couldn’t help but wonder how it would have been to grow up here, on this island, surrounded by water. She would have been another Yo, that much was sure. 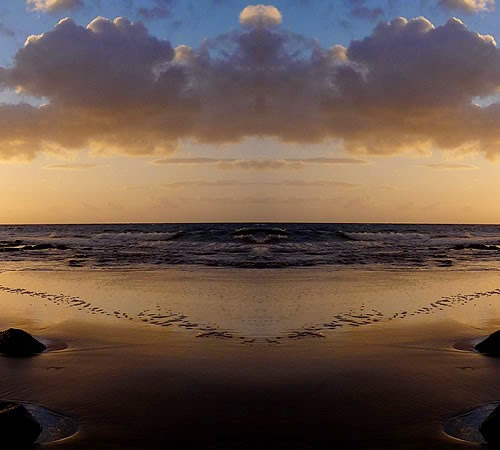