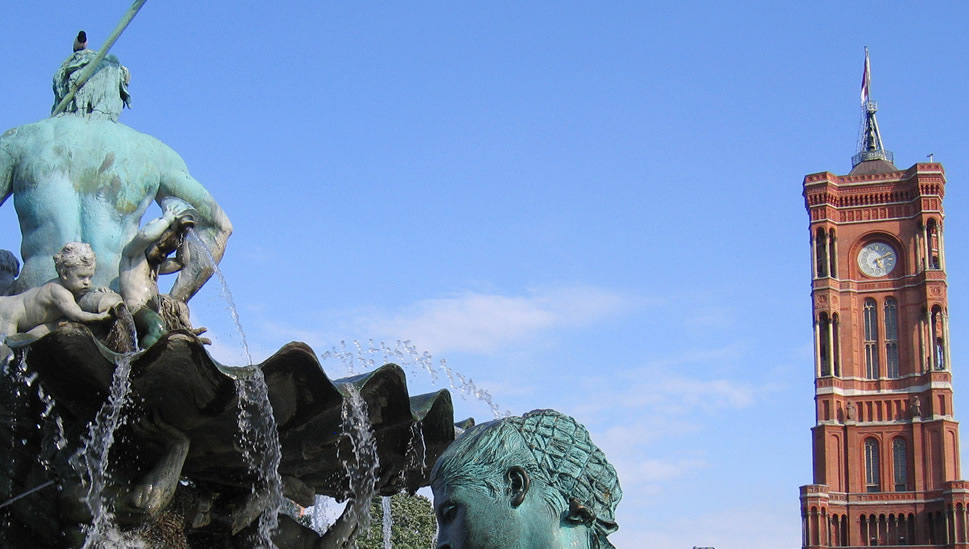 „We provide broad categories for convenience’s sake, but we love to get material that just doesn’t fit into them,“ says Eclectica magazine, one of the longest-running ezines in the web – it started in 1996. At that time, I hadn’t been to the Eastern side of Germany yet, the one that had been locked up for so long. I had been to East Berlin, though. In 1986. on a School excursion. No one would have guessed that three years later, the German-German border would open. Even when it finally happened, it felt surreal.

I returned to Berlin in 1998, on a fly-in-and-out business trip that left just enough time for a quick walk down Kürfürstendamm. A real short trip followed recently, and the unexpected memories that surfaced during the stay now merged into a text that is half travelogue and half short Story. It got published in Eclectica in their issue  eclectica Magazine #v12n4, and recently included in their “Eclectica best of Nonfiction” anthology.

„I’ve never been there, in Berlin,“ I say, my finger pointed towards the TV screen, as if Berlin was right there, behind the glass. Chrissie shrugs. Her grandparents live there, but the place is no big deal to her. Nothing is. I am not sure what to say next, so I shrug, too, and take another spoonful of ice cream.

Lola is Chrissie’s mother. It was her idea to watch TV, to munch vanilla ice cream, there, on her French bed, together with the Siamese cats.

The scenes on the screen are dark, the persons are all adults. The story is one of violence. While the vanilla ice melts on my tongue, I watch a blonde woman enter a restaurant. There is a man waiting for her at one of the tables. At the counter, there are soldiers. Suddenly there are swearwords shouted in a language I don’t understand. Then a fight starts. I try to figure out what’s going on but am interrupted by Lola, who turns to me and Chrissie. „Get out,“ she orders angrily. „These obscenities are not for your ears.“

Chrissie shrugs, picks up her ice, and leaves the room. I take another look at the screen and follow her. The Siamese cats are allowed to stay on the French bed, though, to keep Lola company.

She ignores us. I am sitting at a table of a restaurant in Berlin, together with six classmates. We are ready to order, but the waitress pretends we aren’t there. Like the others, I am unsure how to deal with the situation. It’s as if we had stumbled into the wrong classroom without a teacher present. So we decide to leave, the money we need to spend still in our pockets: 15 Ostmark each, the amount you have to exchange at the socialistic rate of 1 to 1 at the Berlin-Berlin border, even when you only visit the other side for a mere two and a half hours.

We walk back to the Alexanderplatz, to the meeting point. At a book shop, we stop, trying once more to spend our money. Yet the books look as tedious as the ones we have to read for the literature class in school: plain coloured covers outside, too many words on too thin paper inside, and the authors, a far step from the current bestseller lists.

There is still an hour of time left when we arrive back at the Alexanderplatz, but most of the others are there already, too. We are sitting on the steps of a fountain that is guarded by stone snakes, waiting for the bus to arrive, to take us back to our hotel in the Westside. Overhyped and dazed, we pull the unused bills of Ostmark from our pockets and start to turn them into planes, into boats that drown in the snake fountain.

And now what. I’m standing at the sidewalk, in front of an office building that is made of glass, metal and concrete. The project meeting ended earlier than planned, due to a phone call of a team member who forwarded the news of yet another major problem that has to be taken care of not only as soon as possible, but immediately. Thus, after frantic preparations, important TOPs, endless To-Dos, and a rushed goodbye, I suddenly find myself with time on my hands. One hour of unscheduled emptiness. When the taxi arrives, I tell the driver to take me to the city centre instead of the airport.

Twenty minutes later, the taxi stops. I am there. It’s late afternoon. I walk down the street, together with five thousand other persons. I pass MediaStore, McDonalds, KarstadtSport, NikeTown. I pass a stone church. The tower of the church is broken, has been broken since 55 years. It stands there, a clock on it, timeless.

At the Bahnhof Zoo, I turn around once more to see the broken tower, then I board the bus that will take me straight to the airport. It’s in that moment that I am really there, in Berlin, for a second.

There is no way. There are rows and rows of concrete blocks, rising from tumbling ground, reaching to my hips, to my shoulders, over my head. I turn, then turn again. There is Fay somewhere, and Erin, and there are others, couples, tour groups, school classes. We get lost, each of us in our own time and direction, in this monument. There are no words written on the blocks, no explanations given. There is not even an entry.

Yet, to my surprise, there is an exit, in the midst of the stones. I walk toward the steps that lead downstairs, maybe to a tunnel passage. When I see the sign that is attached to the door, I stop. So do the school girls who followed me.

„Is this not the exit?“ one of them asks.

„No, it’s just for emergencies,“ I explain.

One of them shakes her head in frustration. „And, how do we get out now?,“ she asks.

They are about the age I was when I visited Berlin, years and years ago. Back then, this Holocaust Memorial hadn’t even been a plan. It had been as unimaginable as the reunion of Germany, as the Y2K-hysteria, as the terror attack of September 11th. This space, here, had been part of the death corridor, part of the wall area. Now it is part of the centre again.

I turn, and keep walking until the maze of concrete blocks shrinks again, until the ground rises, until I can see the green of the trees, the pink of Fay’s shirt, the yellow of Erin’s top.

It’s our last day together. We all will leave tomorrow, Erin via Tegel, Fay and me via Schönefeld. Our goodbye comes in green, and is named Berliner Weisse: a beer that looks like a cocktail and is served with a straw. We clink glasses there, in this café next to a concrete fountain, next to the church with the broken tower. We take some more pictures. We are surrounded by streets, by people. It’s five, the blue hour, the time of work ending, of the weekend starting.

When I look at the broken church tower, I see a sky of darkness moving in like a float. The waiters start to close the parasols.

„You don’t have to leave,“ the waiter assures us when we ask to pay.

„It looks like there is a storm coming,“ I say.

„Yes,“ he answers, his expression unchanged.

On the way to the s-train station, we walk past a monk who’s riding a turtle. Both the monk and the turtle are frozen in motion, in metal. In front of the turtle, there’s a plate.

Everything is swallowed in the end by the one power: the power of time.

The church tower rises above us, its clock ticking silently, just like the clouds. Underground, we take the wrong direction first, but realize the mistake after the next stop. When the train reaches the surface of the city, there’s hard rain falling, and it’s another city, barren and grey.

„So now we get a glimpse of Berlin in November,“ Erin says.

They are not there. I search through the box of 1980 photos again, but it doesn’t contain the Berlin photos. There’s no transit bus, no Checkpoint Charlie, no group hug, no paper boats drowning in the snake fountain. Nothing.

I should be collecting my keys, should be gone already. Instead I try the 1979 box, then the 1981 box. Again, nothing.

Finally I leave, the library card in my pocket, my mind still in Berlin while I drive along the B10, while I search for a parking spot, while I invent an excuse.

In the library, I walk straight to the D-shelf. D like Dürrenmatt’s Physicians, D like Dostojewski’s Demons, D like Döblin’s Berlin-Alexanderplatz—a book no one made us read at school.

Back home, in the garden, in Berlin, I open its pages. I sit and read, I taste the ice again. I keep searching for those lines that I wasn’t supposed to hear, that I couldn’t understand in 1980.