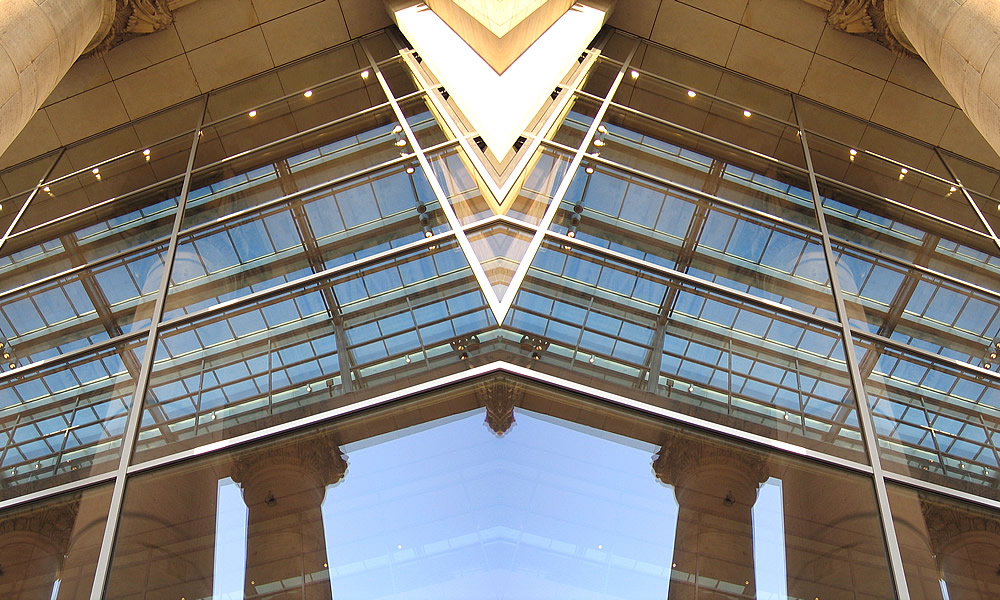 Waiting time from this point: 20 minutes, the sign says. She checks her clock, then looks up to the stone pillars, to the steps, full of people, to the glass dome that is barely visible from this point. Reichstag, the map states. As if it’s still 1940, and not 2007. It must be the historic name of the building, she decides, and tries to imagine the inside of it, the parliament, the politicians, sitting in a large circle of tables. In front, an eagle. On the sides, reporters with their TV-cameras. And above it all, on top of the circle, this glass dome that is a tourist sight. Free entry, 8 a.m. to 10 p.m.

There are security checks, of course. There are double glass doors, screening passages, x-ray gates. The queue moves in slow motion. Yet the sign was right: a good quarter hour later, she is inside the glass dome. She leans over the railing, trying to catch a peek of what’s happening underneath her, in the parliament, but all that’s visible from above are hazy shadows. So she walks in spirals, towards the upper platform, trying all the time to find the line that once separated East Berlin from West Berlin. The Wall, it isn’t there anymore, of course she knows that much, but it takes her by surprise that it disappeared so completely, leaving neither trace nor gap.

She hasn’t heard of it before, hasn’t seen a picture of it. And thus, she almost misses it, even though it’s placed right in the middle of Bebel Square: the empty room. It comes without colour, without door. It’s built underground, right under the stone skin of the plaza. A sealed shaded glass plate is the only access it offers.

Around the plaza, above the surface, pompousness rules: there’s the statue of Friedrich the Great, there’s a classic concert hall, there’s a church wearing a golden crown, there’s Humboldt university with its marble entry.

Albert Einstein studied there, she learns. Also: Karl Marx. They lived here, in Berlin. Crossed the very square she stands on now. It’s this thought that makes her look down, to the cobble stones underneath her feet. That’s how she sees the piece of glass, and the metal plate in front of it. 1933, the plate says, and hands the story of this place, of the past, in 5 short lines. The story of the students who made a black list of books. Then cleared the shelves of the Humboldt library, according to their list. Piled the books up here. And burnt them. 20.000 books. Burnt not by Reich soldiers, but by Humboldt students.

She bites her lip, then kneels down, touches the glass. Afraid of what is waiting on the other side, she searches for the angle that allows a peek through the surface. Yet all she can see – is a white empty space. Nothing, she thinks. It doesn’t make any sense. She stares into the room again, and with a shudder, she feels it: the presence of the books that aren’t there any more.

Hours later, the image of the room, of the square returns to her, accompanied by the cruelty and softness of winter. She sees a frozen place, sees snowflakes falling through still air, covering the stones, the plate, the world as she knows it, and wonders how many people walk over the plaza, walk right over the glass without noticing it. White, she whispers.

The weather looks okay when she walks along Stresemann Street, towards a spot that is supposed to hold parts of the Wall. Yet, just when she is half way down Stresemann, there is a huge cloud coming closer. She considers to turn around, to look for shelter, almost sure that the cloud will break into rain, but then it doesn’t. Relieved, she walks on.

A couple of hundred meters further, she is there, standing in front of the remains of the Wall. Beyond her is another 4-lane-street, in front of her the entry to a railway station. In between, it’s her, some others, and those stone pieces, solid, broken, sprayed with graffiti. They look like art, placed the way they are, on concrete bases. In between the stone pieces, there are displays with black and white photos, each carrying the memory of a specific moment of the past, each framed and dated: 1938, 1945, 1961. From the black and white schemes of the past she moves to the pink dots and green dashes that now colour the stone pieces. In between the dashes, she notices dates, combined with the most basic kind of personal statement: name and year, scribbled with permanent marker right on the surface. As always, this childish, careless, yet deep human urge to leave a mark astounds her.

In her memory, though, it’s neither the signatures nor the wall stones themselves that leave the deepest imprint, but one of the photos: a woman with a suitcase in her hand, jumping out of a first floor window, escaping to the West while houses at the edge of East Berlin are evacuated and closed, one by one, while the wall stones are set. She tries to figure out how long it takes to make such a decision, how much time was left to pack that suitcase. Twenty minutes? Ten minutes? And the woman – did she ever stand here, in this place now, and get to see this photo of her, taken in that moment back then?