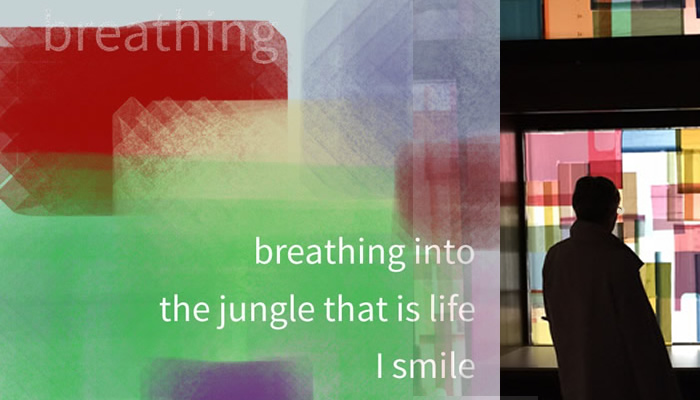 There  was a fleeting morning moment this week: looking out I saw a bright spot in the sky – Venus, I remembered, and checking an regional sky page confirmed it. I hadn’t seen her since a long time, and knew it wouldn’t be visible for long with sunrise bringing more light. 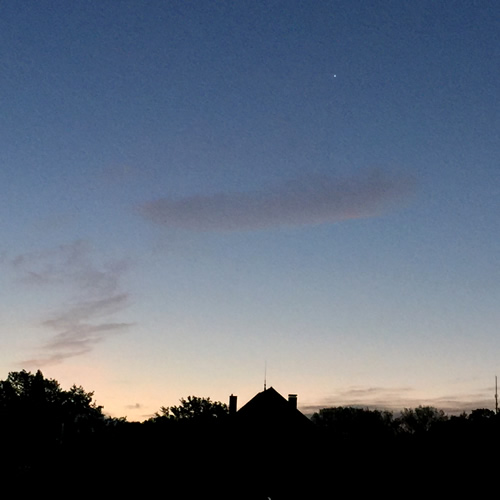 So I took a photo, to catch the beauty of that unexpected sight, and posted it on my instagram page later.

It’s one of the changes this year brought: I took a bit of pause from social media this spring and summer, from facebook and twitter, and even from my blog. Yet the 100 day project brought me to instagram, and I like how it both is simple yet connects easily with a theme or keyword, especially for a creative challenge like the 100 days….
September Passioncolorjoy
…or currently for the „passioncolorjoy“ challenge, the task is to create 30 colorful paintings in 30 days. Hashtag is #pcj30in30.  I came across it through instagram right at the start of September, as one of the participants of the 100 days joined it. For me, it started a new cycle of daily creativity: revisiting micropoems from previous months, and combining them with new digital color sketches. Here’s one from this week, also catching up on the feeling of seasons changing. I have started a hashtag for all of them, which indeed turned rather colorful so far: pcj30in30dl 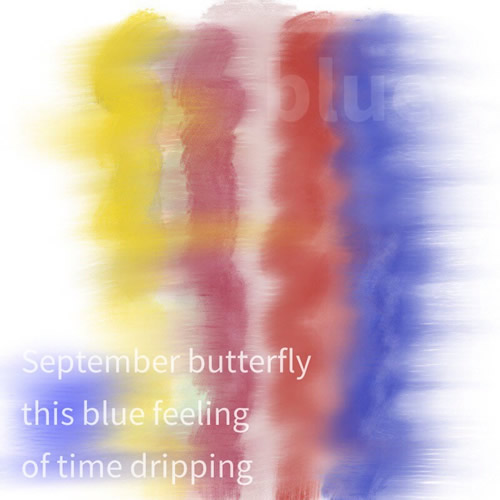 Reflecting the days
Since its start, I thought of blogging about it, too. Also, I thought of blogging about the books I am reading. And the art places I went to…. yet I didn’t know where to start. Putting a blog post together for each them felt too much. Plus, the instagram posts already include some of the topics. And I like how they are more spontaneous, „live from the moment“. That in the evening, it’s not like: and now to write a blog
post…  but then, they don’t give much context, and the text isn’t visible when scrolling through the images.

So I thought: I might try a longer post each week, a reflection of the week. With some impressions, places I’ve been to, a sky moment, a note on the books I am reading. And with links – which insta isn’t very helpful with. Also, putting the themes of the week together in a collected post creates a space for reflection. And it might lead to noticing some cross-connections. Like this one:

Situation colorful
This week, I met up with friends for a coffee, and also to visit a local gallery. the exhibition had the title „Situation colorful“, and we looked forward to that on a rainy day. The gallery windows were covered with color sheets, so we couldn’t see inside. Full of anticipation, we walked in – into an empty room. Turned out, the installation indeed was the color-decorated window front. 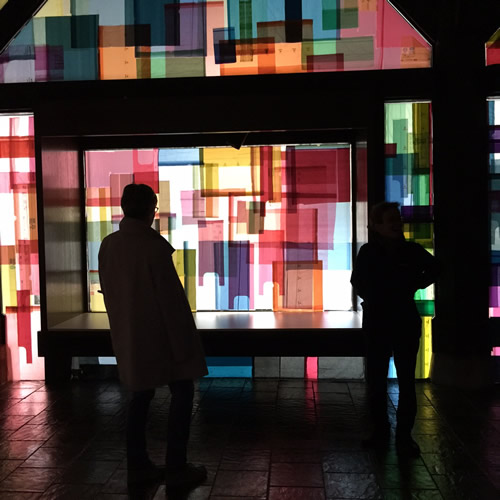 The curious thing was that while being there, it didn’t look so special, neither from inside or outside. The artist, Tina Haase, is working with everyday materials – and the colour patches actually are household rubbish-bags from all kind of places. I took some photos, and when looking at them, that’s when it started to look really interesting.
A day later, when finishing my next digital color painting, I had to smile: without planning to, the „Situation colorful“ had influenced my visual: 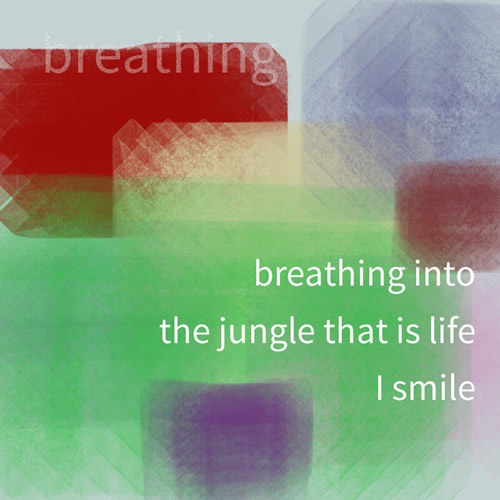 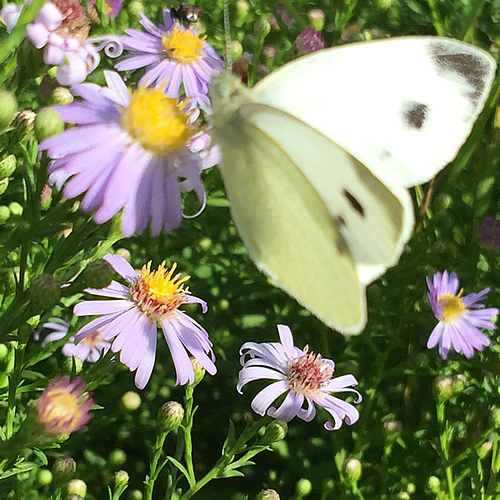 This week was rather windy and rainy altogether, yet with some half hours of sun in between. I am glad my  work is so flexible that I can make a pause when the sun is out – which brought  a lovely  book moment yesterday, a book that I have since a while, but only started to read now – it has the unusual title: „The Long Way to a Small, Angry Planet“. Turns out, it is unusual: multi-cultural science fiction, and one of the „heroes“ is a clerk… it’s described as  „A science fiction novel that explores humanity’s intergalactic future through the eyes of the everyman.“ It’s told from shifiting perspectives. The author is Becky Chambers – my fav quote from it so far is on dealing with the drama of the world:

“All you can do, Rosemary – all any of us can do – is work to be something positive
instead. That is a choice that every sapient must make every day of their life.
The universe is what we make of it. It’s up to you to decide what part you will
play.“

Here’s more about the book at goodreads: „The Long Way to a Small, Angry Planet“ by Becky Chambers.
And here’s a sweet reading moment: the sun appeared, and so I went outside.. and the red cat appeared. I put up the hammock, and then read while the cat dozed: 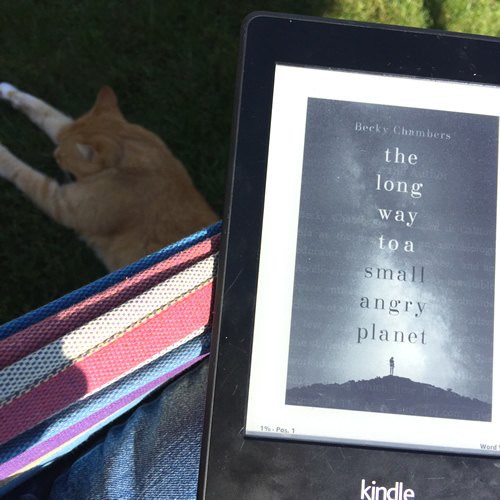 The way the book came together is a good story in itself: it’s crowdfunded, this is what Becky Chambers writes about it on wired: „My first book was the first time I had any fiction out there. … I used Kickstarter to fund my remaining months of writing time. I was about two-thirds of the way through the manuscript and my freelance work dried up, so it was a sort of do-or-die, Hail Mary trying to get that book done. And I told myself at the time, ‘If this isn’t successful, it’s a sign that you need to go get a real job,’ and to my eternal surprise it was a success. So yeah, that was the thing that kind of got the ball rolling. … There were a few friends and family [who contributed], but most of the people were folks, I am assuming, who knew me from my games writing. But beyond that, to this day I’m just like, who were these people? Because I’m eternally grateful.”

The other book I am reading is rather rough, it’s „Bataclan“ by Fred Dewilde, a survivor of the 2015 terror attacks on the Bataclan club and other places in Paris. . I received an extract of it as part of my freelance jobs, to upload it – it’s here (in German): Bataclan. The book is part graphic novel, part autobiography. And with the news of yesterday, the attack in London, it is painfully topical. Reading the book also brought back memories of my own impressions from Paris: walking in the evening, under a changing sky. Crossing bridges, visiting the bookstore Shakespeare & Company. Thinking of all the people who walked those streets before me. 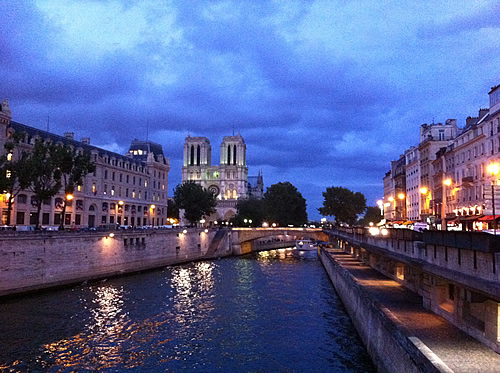 Learnings of the week + Making Mistakes

A tiny, but symbolical learning of the week: there was a PDF-document, and I needed some of the text. I started copying it, then felt: that isn’t the way, as it copies all line-breaks, too. So I went looking for a converter, and learned: well, I have the tool already Adobe Acrobat has a function for that. I tried that now and: yes, it works, easily, and comes out really well.
A good lesson: sometimes we have the tools already. and: better to pause and consider the options first before just going the well-trodded thought-free but possibly not most practical way.

Ending this post… with a photo of a sculpture, a group balancing act, by artist Fritz Nuss, an artist from this region. So much like life, I thought. 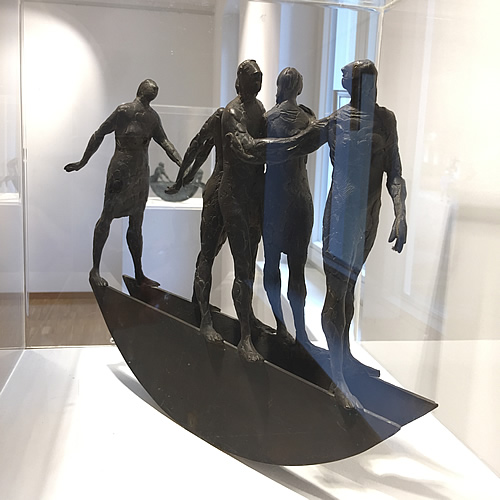 And a quote that spoke to me this week – a mistake wish from Neil Gaiman:

„I hope that in this year to come, you make mistakes.

So that’s my wish for you, and all of us, and my wish for myself. Make New Mistakes. Make glorious, amazing mistakes. Make mistakes nobody’s ever made before. Don’t freeze, don’t stop, don’t worry that it isn’t good enough, or it isn’t perfect, whatever it is: art, or love, or work or family or life.

Whatever it is you’re scared of doing, Do it.

Make your mistakes, next year and forever.“